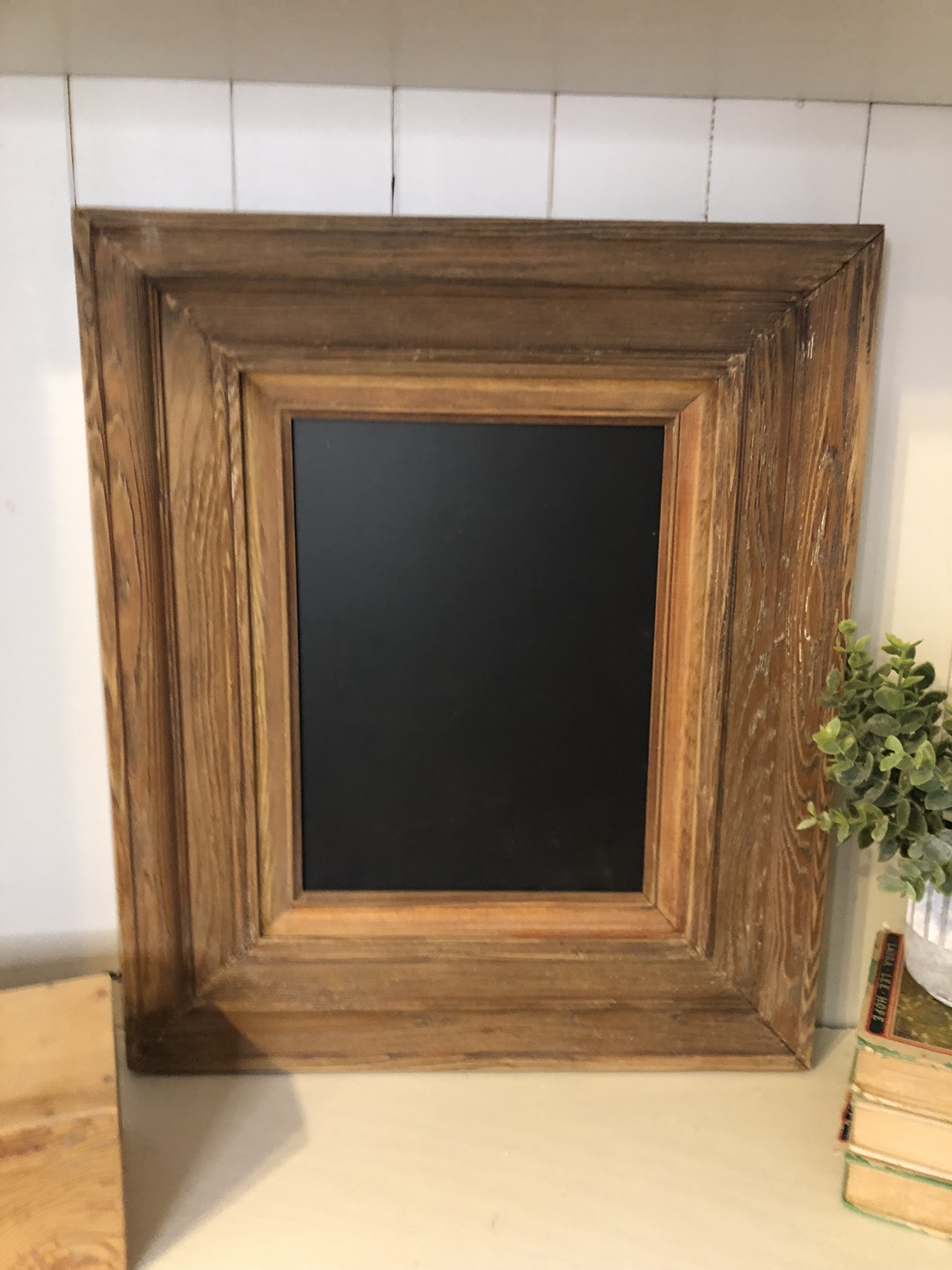 By now, many if not all of you DIY’ers or those that don’t DIY but love to watch others DIY have seen the projects that are starting to use oven cleaner as part of the process for stripping wood. I thought I would try it because I wanted to see what actual results you end up with when using this process.

I am the type of person that can’t read a 4-page blog on how to do something. I would rather read a 1-page blog with big pictures that basically gives me the outline and then I tackle the project. Sometimes this results in a bad outcome, but more than not… it is a great outcome.

I will give a piece of advice that I followed when attempting a new technique. Don’t use the piece of furniture that you are wanting to try the finish on first. Use something smaller. This is especially true when you are doing something outside the norm. I purchased two wood frames of different sizes to try this technique on. Both frames were purchased from the Salvation Army. The bigger frame was $2.99 and the smaller frame was $1.99. I don’t think you can go wrong with losing that amount of money if your project goes wrong. Smaller projects also mean less time for completion so if the project isn’t going well, it’s better that it’s a 2-hour project and not a 10-hour project.

I started with the large frame first. It had a lighter original stain tone with big grooves in the wood. The grooves and frame did have a warm brown and gold-tone to the frame. First, I sanded the frame all over. I wasn’t able to get into the grooves very well but to be honest, I just wanted to rough up the poly on the frame to see what the oven cleaner could do on its own.

I bought the store-brand fume-free oven cleaner rather than the name brand. I felt that using the name-brand wouldn’t produce any better outcome and why not save some money.

I left the oven cleaner on the dry wood for 10 minutes the first go-round. Then I scrubbed the wood with a small brush. It was something I had at my home already. I believe it was a tartar toothbrush for pets. I loved that it had two different size brush heads. I was able to use the bigger side on the bigger parts of the frame and the smaller side for the deep grooves. I will say that after only 10 minutes, I could see it was working because the brush became really dark with the stain. I used the water hose to remove all the debris once I had scrubbed all the sides of the frame.

I let the frames completely dry and then applied the oven cleaner and let them sit for another 10 minutes and started the scrubbing process all over again. If my stain and poly would have been even thicker, I probably would have let the oven cleaner stay on longer. But I could see I was getting results with just that amount of time.

Once the frames were hosed off with water and let to fully dry, I took fine sandpaper and just barely went over the surface. Next, I wiped off the dust and applied Behr wax. I used clear wax for the small frame and I just love the wax just protected the wood without changing the stain color.

The larger frame still had some gold tones to the wood and I really didn’t want to spend more time being meticulous when I was going for a true vintage finish feel. With the larger frame, I used white wax. My hope was that the white wax would collect in the cracks where the gold wax remained and make it seem purposeful. I do think that the white wax accomplished this goal. I will say that I think the large frame ended up with more of a vintage driftwood tone and not so much of the vintage warm tone that I was able to achieve with the small frame.

I ended up attaching chalkboard to the inside of each frame. I had a remnant piece of actual chalkboard that worked for the small frame. For the larger frame, I cut a piece of 5/8″ plywood to fit the frame and just painted it with several coats of chalkboard paint (allowing each coat to fully dry before adding the next coat).

I think the project turned out fabulous. I am still debating on the final place they will be placed in our home. Knowing me, they will move around 10 times in the first week and then stay put just for a few months before being moved all over again. I am also busying thinking of what wooden items that I have at our house that would really benefit from this technique. Stay tuned to see what else gets the oven cleaner technique and once again, thank you for following along on my DIY’s and home improvements.